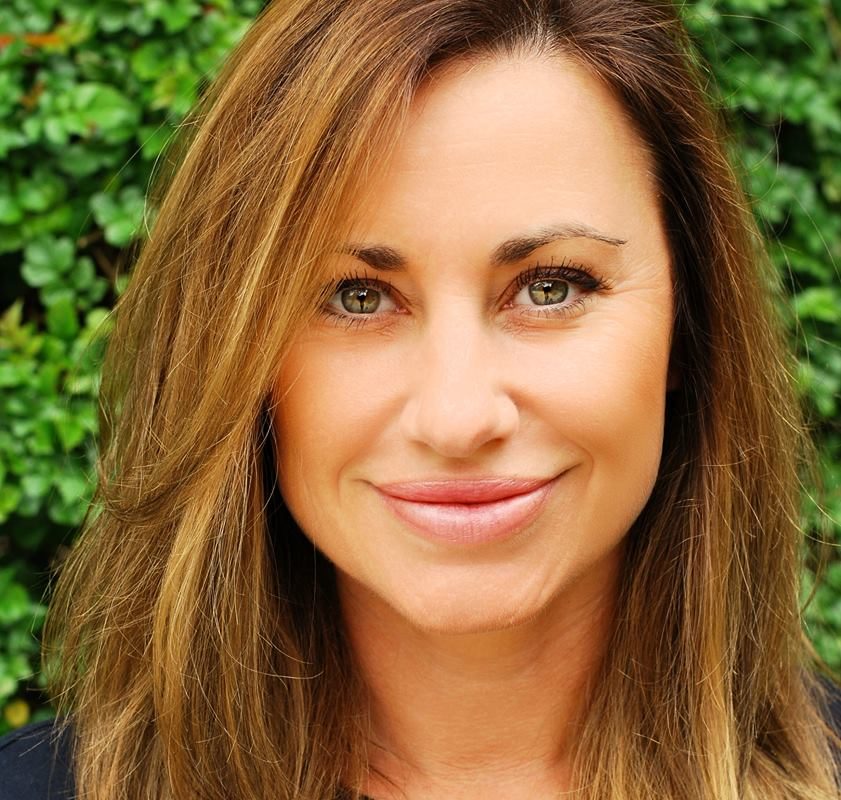 Did you always love movies? What was your favourite movie as a child?

Since I can remember I have been obsessed with Hollywood and films. Actually anything to do with entertainment. Like many little girls, I used to sing into my hairbrush, and can still be caught occasionally dancing around my lounge singing karaoke with friends!

My childhood favourite movie was Grease. When it was first released I had just started junior school in London. My friends and I used to reenact scenes from the film. I always played Danny, as I had the dark hair and so wasn’t allowed to be Sandy. She had to be a blonde! I didn’t mind so much – I had a cool solo as Danny which I was able to sing full throttle in the playground!

Did you have any other aspirations/idols when you were little?

From an exceptionally early age I dreamed I would live in Los Angeles. All the glitz and the glamour of show business. To me it was home to some of the biggest names in film – it seemed so far away. I went to stage school, I had acting lessons and more importantly I had vocal training. Quite literally thousands of pounds have been invested in my voice. Much of my younger self was spent on stage, singing in musicals and acting. I was a tap dancer too. I think it is because of my childhood as a performer, I can relate to my clients and the entertainment industry from both sides of the camera.

As a teen I would interview my friends at school. I was in ore with Kate Adie, the BBC’s chief news correspondent. She was fearless. I wanted to be the next Kate Adie. Although I carried on singing, and added voice over to my resume, I decided to follow this new direction and learn a couple of languages, French and Spanish. I thought that languages would give me an advantage when reporting abroad. I picked them both up pretty well, and with that added another string to my bow. I decided to enter the world of international media, and that was that.

In terms of your job now, what was the starting point, your first job?

I studied corporate international marketing and media – not entertainment specific. That came much later, and actually fell into my lap. When living in Spain I was working for a major international real estate company. I would plan their events and exhibitions all over the world. The marketing and logistics, country specific media buying and publicity angles to support the exhibitions and conferences – that sort of thing. I have also travelled all over the world and have fully embraced the cultures I was working/living in. I feel that way you have a better understanding of the local cultures and what is acceptable. It definitely helps today with my international PR efforts. Everything is tailor-made to that country.

One day out of the blue I was asked to location scout for a British production company. Someone, somewhere had a mutual friend and as I was fluent Spanish thought I could be useful. I was asked to help with location negotiations, cast extras, write press releases and drum up a general buzz about the film being locally made. As people began to hear about the film, and me, I became a ‘go to’ person for film and TV shows. I also started my own magazine and guest wrote for a number of others.

From there, I was frequently asked to help launch a company or new bar/restaurant/establishment. I’d roll out the red carpet for them and invite my media friends to cover the event with me. I organized large charity gala events and even overseas soccer tournaments with celebrity players. Things just took off. After a couple of years bobbing along like that, I decided to make what I did for fun, a bit more official, and launched my own company EMR Media in 2004. I guess you can say everything fell like dominoes from there.

Did you move from the UK to the USA to take on this role or was it something else that led you there?

It wasn’t that cut and dry for me. It was more of a transition. Around 2005 I was approached to help set-up a film festival in southern Spain. Some of the elements were in place, but the team needed a great location, decent indie-movies to screen and more importantly bums on seats. So often at a film festival screening, the only people watching the film is the filmmaker and their friends. That doesn’t help the film at all so it was our mission to bring in the whole local community to enjoy the festival.

In addition to great movies to watch, we developed the ‘Fringe Festival’ which was jam packed with live stage performances; music, celebrity guests and suchlike. Plus, we invited sales agents and distributors along to create a mini market. I worked with the film festival, in between other work, for 5 years selecting Hollywood movies to premiere at the festival, selecting films etc. I was fortunate to meet so many filmmakers, sales agents and distributors along the way. Eventually one thing led to another and the move was naturally made.

Tell us about your company and what you guys do?

Where to start! We are an international marketing, branding and communications company specializing in global campaigns in promotions, public relations, special events, product launches, target marketing and brand awareness.

Over the last 25 odd years I have personally worked in some major international markets for corporate clients and brands, covering a diversity of cultures including; the Middle East (Dubai, Qatar, Abu Dhabi), Europe, South Africa, Thailand, New Zealand, Australia and the USA. We work as film, TV and personal publicists. We organize celebrity red carpet events, celebrity meet and greets, corporate exhibitions and launch start-up companies. We even handle social media for films, TV shows and individuals. Anything that involves marketing, branding and PR basically!

What has been the most rewarding part of the job?

Every part of my job is rewarding. I am able to wear so many hats. I enjoy helping people rise to the top through our strategic publicity campaigns. From zero to hero.

I find it incredibly rewarding to help an overseas entertainment industry professional be given the opportunity of their dreams to live and work abroad, by helping them with much needed press placements.

I love to work as a unit publicist on films – working on-set with the cast and crew for press coverage, interviews, generating the buzz so it becomes a ‘must-see’ film, and of course end on a high with a red carpet premiere.

I have produced a countless number, of red carpet events in Hollywood. I think the events we produce are my favorite. I find the glitz of organizing the venue, caterers, inviting the press, cast, special guests to an event to enjoy is amazing. Each event is unique to that project, so it is always a fresh experience.

I even write for a few magazines and newspapers – life is definitely never boring!

Best piece of advice you’ve ever had?

I have been given lots of solid advice over the years, I tend to listen and make up my own mind. I do have a top three though. When I was 10, on my birthday as I was awaiting my party guests of about 20 best friends, my father told me that, “20 best friends are too many, people will come and go in your life,” he added, “If you can count on one hand your best friends as an adult, you will be very lucky.” It was a bit of a downer at the time, but in hindsight, he had a point.

I was also told by someone else that “It is very nice to be important, but it is more important to be nice.” So many people in the world forget to be nice as they climb the ladder to success. Remaining humble and grateful is so incredibly important.

The third piece of advice that stays with me is that “Stars don’t brag they shine.’ I love this one. Just says it all.

If you could pick a dream project or film coming out that you would want to work on?

This may sound corny, but I am literally living my dream. There isn’t a particular film out there I dream to work on. I enjoy working with everyone, the independent filmmaker, managers/agents and the studios. Of course working with a bigger budget is more desirable as you can do so much more for the film or person even – but projects don’t fall into my lap like that.

When I am introduced to a project, or person, if I feel for the subject matter or can relate to that person, my mind is literally spinning opportunities, bursting with ideas and angles in the meeting. I get super excited. I have to feel passionate about what I am working on, that way I know I will be fully invested so it is a success.

That all said, I would like to work on an indie-film from pre-production that, through our joint hard work and effort, is nominated for an Academy Award. Gosh, that would be amazing. To go through the entire journey of the film; the making of it, film festival circuit etc. – all to end with walking the filmmakers down the red carpet, passing the golden Oscar statuettes, and up on stage collecting an award for any of the categories. I would find that incredibly fulfilling.

What’s next for you and EMR Media?

We are always taking care of our clients – this happens every minute of the day, 24/7, and there is always something new to get our teeth into. To give you an idea though, we are producing a few red carpet events in Hollywood and Las Vegas, and next month we start working on a very cool new indie-feature film. I am also excited about teasing out the launch of a new children’s book to the media.

As for my more imminent plans, I am headed to San Diego next week with my client, actress Katherine Castro. We plan to get our ‘trekkie’ on at the Star Trek Beyond premiere at Comic Con.

How can someone get in touch with you or your team?

We love people getting in touch. Best thing to do is drop us an email to: info@emrmedia.com. We respond promptly to everyone.

Thanks to Liz Rodriguez and EMR Media for their time with the interview.