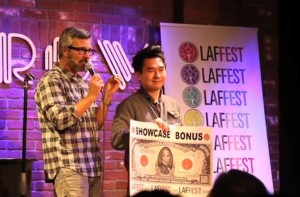 LAFFEST (www.laffest.com), the media platform designed as the career network hub for comedians, wowed audiences on Sunday night at the world-famous Hollywood Improv, with a LAF a minute line-up and ended with Kevin Shea (@KevinSheaComedy) taking home the $1000 grand prize for the month of March.

After the show the winner, Kevin Shea, took a moment to chat to LAFFEST;

LAFFEST: Congratulations, how does it feel to take home the big award?
Kevin: I feel like a million bucks….scratch that, a $1000 bucks.

LAFFEST: This was your second time in a row in the Top 6, how did you get your fans to watch and rate your stand-up clip to put you over the top this time?
Kevin: They got sick of me bugging them so they probably said to themselves we gotta get him to win or he’ll keep harassing us.

LAFFEST: What do you plan to do with the $1,000 Award?
Kevin: Straight rent homie.

LAFFEST: Finish this sentence: I knew I wanted to be a comedian when…
Kevin: …I couldn’t rap or dunk a basketball.

LAFFEST: We see big things for you in the future, what are you most excited about?
Kevin: Working on an Hour Special.

LAFFEST: Thank you and congratulations again from all of us at LAFFEST, any final thoughts?
Kevin: I really wish that I had gotten a giant sized check, I would have loved to see the look on the teller’s face.

For further details on LAFFEST and how you can take part or nominate a comic
visit www.Facebook.com/LAFFEST or www.LAFFEST.com