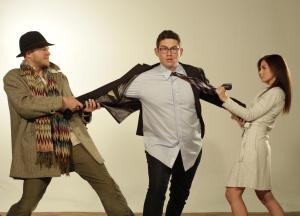 Hollywood’s hottest new dramedy play ‘Double Bind’ which premiered at the 2013 Hollywood Fringe Festival this month, picked up two  awards last night ‘Best of Fringe Extensions’ and ‘Best Writer’ from its run at the Theatre Asylum in Hollywood. Directed by the award winning director and LA Weekly Awards nominated director Aaron Lyons, ‘Double Bind’ was written by the exceptionally talented actor Blake Shields Abramovitz (‘Tekken’, ‘Heroes’), who last night picked up the ‘Best Writer’ award for his passion project, and also stars in the play as Frank. ‘Double Bind’ is a two-act drama in the tradition of Sam Shepard and David Rabe. It focuses on two friends, Sam, played by Clark Freeman (‘Yellow Brick Road’), and Frank who once traveled the world together having all kinds of wild adventures. They chased women, took mind-expanding drugs, and made music together. As the play begins, Sam, an intellectual and a poet at heart, has settled down with a serious, passionate woman, Laura, played by British actress Ceri Bethan (‘Dirty Little Trick’), and a real job. Frank, a charismatic but profoundly damaged street-singer and hustler, is still out living his unbridled neo-beatnik life. But he desperately misses the only true friend he ever had; and so he shows up and sets about trying to upend Sam and Laura’s incipient cozy life, in what becomes a ‘tug of war’ between friendship and love with a conflicted Sam in the middle.

During its two week run in Hollywood ‘Double Bind’ received rave reviews from critics and audiences; “Don’t miss this show – it may be one of the best at the Fringe this year.” – Bob Leggett The Examiner. “This wonderfully mounted play will keep you laughing and remembering a time when free love, drugs and the search for human liberation was the theme song on every… barefooted, flower-wearing young person’s lips at every turn.” – Michael St. John, Canyon News. “Blake Shields Abramovitz, brings both menace and intelligence to Frank… Ceri Bethan is outstanding and always utterly real as Laura… Clark Freeman shines” – Sandro Monetti, Actors Entertainment. “Brilliantly written by Blake Abramovitz, this three person ensemble piece takes you on a rollercoaster ride for a short 80 minutes” – Audience Review “Double Bind” is a gem among Fringe offerings. Blake Abramovitz’s script is fascinating, offering an enticing storyline, well defined characters, and dramatic tension worthy of Edward Albee.” – Audience Review “The acting, writing and directing are phenomenal in ‘Double Bind’.” – Audience Review

For future performances of ‘Double Bind’ check online at: www.doublebindtheplay.com