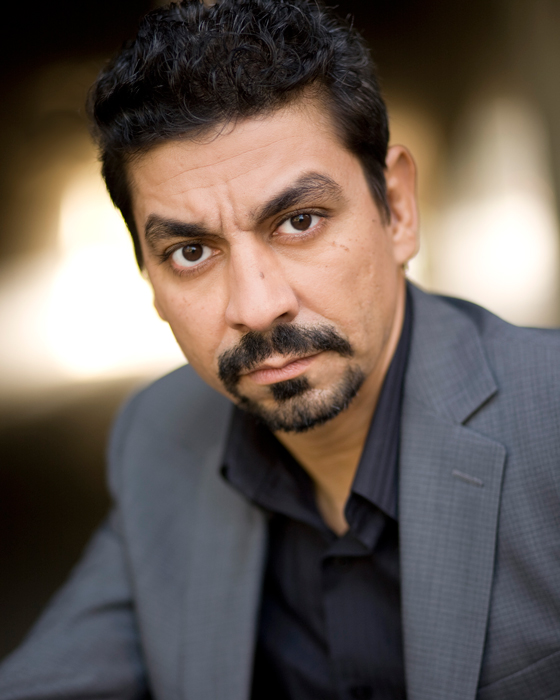 With this year’s Oscar race hotting up, one film that is making a late dash to the finish line is Clint East wood’s American Sniper, starring Bradley Cooper and Sienna Miller. In amongst all of the A-list talent is little known actor Ayman Samman, who is in the midst of living his very own “American Dream”. Flickering Myth Staff Writer Scott J. Davis was able to sit down with the actor for an exclusive interview to discuss Hollywood, Clint Eastwood and everything in between.

SJD: Did you always want to be an actor when you were younger?

AS: As a child, I looked up to my grandfather, who was a great storyteller. At family gatherings, I would insist on being the center of attention, telling the latest jokes. The instant gratification of laughter stuck with me and motivated me to pursue a career in entertainment. I wanted to invoke feelings in others, and acting has fulfilled that urge.

Who were your influences/idols in Hollywood when you were growing up?

I loved watching Spaghetti Westerns, so Clint Eastwood is at the top of my list of influences. I was a skinny kid from a third world country, and his work showed me what a tough, American bad-ass looks like. I also had great admiration for Al Pacino and his ability to effortlessly embody characters.

When you first moved to Hollywood, was it hard to acclimatise to your new surroundings? Was it difficult to leave your home and family?

It was a very difficult decision to leave my family behind in pursuit of my American dreams. I come from a very strong, connected family, and I knew less than a handful of people in the States. That being said, I am lucky to have supportive parents who encouraged my creative endeavors. Thankfully, with technology, I am able to stay in touch with them on a regular basis.

When my wife and I moved from Chicago to Hollywood, we weren’t sure what to expect in LA. Would we fit in? Would we make it? Much to our surprise, we discovered ourselves surrounded by supportive and collaborative artists. It did not take long for us to feel right at home.

You have appeared in some television shows in the US along your journey, did you want to try to sample as much of Hollywood as you could?

There are so many ways to express creativity in Hollywood: theatre, film, television, web-series, and even stand-up comedy.  I think that telling stories effectively requires being adaptable to all these mediums . So far, I have enjoyed the challenge of fast pace television projects. Hollywood is like a buffet and I am hungry for it all.

How did you come to be cast in American Sniper? Was it a long audition process?

I got a call from my agent in early January, 2014. I was excited to be considered for a movie of this caliber and dove right in and worked hard on the scenes. I had about a week to prepare, which was great. My wife coached me and shared some interesting insights that helped me delve deeper into the character.

On the day of, I was ready for the two intensely dramatic scenes. I was asked to do both on camera, twice. The audition itself lasted only moments. I had fun and left with a joyful feeling. Fast forward three months, to the follow-up call from my agent, letting me know I had booked a role on the film. I recall screams, jumps, hugs, and cartwheels… although, the acrobats may have been imaginary.

What was it like to meet Clint Eastwood for the first time? Was he involved in the casting process?

He was not at the audition, and I’m not sure of his involvement in the casting process. I initially met Clint Eastwood my first day on set. On the outside, I was calm and professional, but the giddiness inside me was bursting out of control. I had to resist the urge to quote his famous lines, like “Go ahead, make my day.” or “Are you feeling lucky, punk?”

I did feel lucky! Mr. Eastwood is a powerfully calming and welcoming presence. He immediately made me feel like I was supposed to be there, acting in his film. Still, there were moments when I had to assure myself that this wasn’t part of a fantastical dream.

Was it intimidating working alongside such a big named actor like Bradley Cooper? How was he to work with?

Before meeting Bradley Cooper, I was a bit intimidated. However, when I arrived on set, he graciously introduced himself with a genuine smile that instantly put me at ease.

A couple of scenes we shared required us to execute some intense physical moves. Bradley was exceptionally conscious in making sure they were done as safely and authentically as possible. At the end of the day, I felt we were both on equal footing, collaborating and delivering the truth of each scene as best as we could.

Early buzz has Cooper in the Oscar race for his performance in American Sniper. Did you get the sense on set that this may happen?

Bradley Cooper is a generous and dedicated professional. As a fellow actor, I could tell he worked hard to give Chris Kyle the tribute he deserves. Having observed his authentic nature, both on and off camera, I won’t be surprised when he is nominated. I am absolutely rooting for him, as I believe he truly deserves an Oscar win.

Now that you have broken into Hollywood in a big way, is it everything you had hoped for?

Actually, it is beyond what I had hoped for! I came to Hollywood with big dreams and realistic expectations. I was told to give my career at least ten years before being discovered. The pace of how quickly things have manifested amazes me. I feel fortunate to have worked with an international legend like Clint Eastwood after only being here for a few years.

Do you still actively do stand-up comedy? It’s so different to your role in American Sniper. Is there a preference to you – on camera or on a stage?

I perform stand-up comedy regularly in serveral renowned Hollywood comedy clubs. I love to make people laugh. I believe there is a healing quality to laughter. Actually, my enjoyment comes from the reaction people have to my performances. Whether that happens through drama or comedy doesn’t matter to me. My hope is that by igniting emotions in others, I take people away from the hectic daily grind.

Would you go back to being an Egyptologist again later in life?

I could see myself having fun as a host for an Egyptian travel show, but I don’t believe I would go back to being an Egyptologist. It was a stepping stone that fed my love for history and storytelling. It still serves me as an actor and writer, as a repository of hundreds of characters and scenarios. I am grateful to be where I am, doing what I love.

What’s next on the agenda for you, any new projects on the horizon? Is there anyone you would love to work with in the future?

My wife and I created an online sketch comedy website called The ADD Channel, which keeps me busy between projects with web-series like Yoga Matt, where I play a self-proclaimed guru who learned about yoga through books on tape, while serving a short sentence for a minor felony.

I am currently writing a comedic horror screenplay based on circumstances of the kooky neighborhood where I live. I am looking to produced a short drama I wrote, inspired by being trapped in Egypt during the 2011 revolution. I am most curious to see what doors open up after American Sniper’s official release.

It would be a dream to work with director, J.J. Abrams. A short list of actors I would like to collaborate with include Benicio Del Toro, Benedict Cumberbatch, Christian Bale, and Jennifer Lawrence.

Many thanks to Ayman Samman for taking the time for this interview.

American Sniper is released this Christmas in the US, before its UK release on January 16th.

This story can be found: http://www.flickeringmyth.com/2014/12/exclusive-interview-ayman-samman-star-american-sniper.html