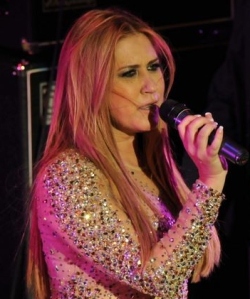 Fresh off the stage from collecting her three awards at the prestigious 22nd Annual Los Angeles Music Awards in November at the Avalon Theatre in Hollywood, Award Winning Singer-Songwriter Lisa Marie Panagos (www.lisapanagos.com) has been newly nominated for ‘Best Dance Artist’ and ‘Critics Choice Award for Breakthrough Artist of the Year’ at the 2nd annual Artists In Music Awards (www.aimusicawards.com) being held on February 7th at the world famous Key Club on Sunset Boulevard in West Hollywood.

Lisa has been enjoying amazing recognition for her hit international dance single ‘Mind’s Eye’, which was produced by Mac Quayle. Not only has the song made the Top 5 on the DJ charts but has also now earned her ‘Music Video of the Year’, ‘Electronica/Dance Artist of the Year’ and ‘Outstanding Debut Release’ awards with two new award nominations next month at the Artists in Music Awards.

“I am so excited to have won three awards at last November’s LA Music Awards, but to now be nominated again at the Artists In Music Awards in February is just yet another dream come true.” enthuses Lisa.

During the course of her all-embracing acting, music and recording career Lisa has worked with some of the music industry’s biggest producers, re-mixers, writers and arrangers including Mac Quayle (Beyoncé, Madonna), hit songwriter Alex Forbes, Ed Goldson (Jay Z, Eve), Dave Bianco (Bob Dylan, Mick Jagger, Tom Petty), Tommy James (Duke Ellington Orchestra) and Grammy Award winner Rob Chiarelli. Lisa has also developed a catalogue of over 100 songs and tracks ranging from R&B to dance all available for licensing for TV, ﬁlms, commercials and new media, and has performed to audiences around the world with her original music, musical reviews and book shows making her a well-seasoned international writer and performer.